The History of Standing Desks – What You Didn’t Know

Ergonomic office furniture has become a popular choice because of reports that standing more during the day could help with diseases caused by a sedentary lifestyle.

However, standing while working is not a new trend; in fact, the history of standing desks may surprise you. It’s a growing trend in the world of office furniture, but standing desks are not new…they exist for a long time already.

Early History of the Standing Desk

It’s hard to say when the first standing desk was used. Technically speaking it’s just necessary to work while standing instead of sitting.

With this definition, you can date standing desks way back to the 1400s when Leonardo Da Vinci used the standing desk method while painting the Mona Lisa or designing flying machines and armored cars.

Later on in the 1800s, the advice of the English dissenting minister may have played a role in the popularity of standing desks. The Presbyterian Minister Job Orton [1] said:

A sedentary life may be injurious. It must therefore be your resolute care to keep your body as upright as possible when you read and write; never stoop your head nor bend your breast. To prevent this, you should get a standing desk

A standing desk was considered more common in some areas than seated desks, especially in the offices and homes of the wealthy society.

It was a privilege to own standing desks, such as owning maps, books, and documents.

The standing desk was used to get a better view of them when spread out.

They were also particularly common in government offices such as state legislatures such as the State of the Union.

Inventors of the time filed patents for desks that could be raised and lowered with hand cranks already.

Employees often shared communal desks, many of which were built at standing height.

The Sedentary Lifestyle During The Industrialization – The Modern Era

Before Industrialization, most of the population participated in manual labor and farming.

After machines took over a lot of people started to get more into the supply of services. It became common to work in offices at a desk and sit for 6-8 hours per day [2].

Therefore there is a trend in research about the effects of sedentary habits and lifestyle on our bodies and health.

Negative effects that could be found are:

Because of those risks, there is a common demand for standing workspaces to prevent them.

A paper from the Society for Human Resource Management shows that since 2014 the number of companies providing a height-adjustable standing desk for their employees has increased by 33% [3].

And the trend keeps rising. Modern work life is still adapting to the needs of the human body. Besides designing offices more ergonomically, another measure is more activity.

Physical activity can counter the negative effects of sitting all day long, thus it’s even implemented more into office lifestyles by doing active breaks with walks and stretches and including more movement into the activities of daily life.

Standing desks date all the way back to Leonardo da Vinci in the 1400s.

Da Vinci painted some of his most prominent masterpieces (such as the Mona Lisa) while standing behind the desk.

Thomas Jefferson, the third President of the USA, was the first prominent person to use standing desks in America.

Jefferson requested that the desk be made with six peg legs to increase stability. The desk boasted a flatlined writing surface that could be used for reading or drawing.

Something that is even more surprising is that the height of the desk could be adjusted with a ratchet already.

Many of Thomas Jefferson’s most famous writings were created at this mahogany and yellow pine desk.

Many consider Charles Dickens to be one of the best writers of all time.

Dickens conjured the ‘gloriously vivid” cast of characters for his novel David Copperfield at his stand-up desk, as Elizabeth Gaskell noted when she visited his study.

Dickens was considered by most to be the preeminent novelist of the Victorian era.

Virginia Woolf is best known for her four books

Her nephew and biographer wrote that she had a standing desk about three feet six inches high with a sloping top.

She wrote: “A woman must have money and a room of her own to write fiction.” Her nephew wrote Woolf’s desk was “so high” that it forced her to stand to do her work.

Nietzsche stood to work and fervently believed that work done sitting was useless:

“How quickly we guess how someone has come by his ideas,” he said.

‘Crying intestines betray themselves — you can bet on that — no less than closet air, closet ceilings, closet narrowness-” “Crowded’s” is the work of a philosopher, cultural critic, and poet whose ideas continue to ripple through modern intellectual thought, including the poet and philosopher.

“I can’t claim my brain worked better, but if you feel good, you tend to work better”.

Rumsfeld became a convert before the tall desk was widely available.

Hemingway uses his typewriter at a stand-up desk and a reading board for longhand writing. He got the idea from his editor at Scribner’s.

The writer almost always stood to work due to a leg injury from WW I.

He stood in his bedroom in Cuba, hemmed by a newspaper-covered heap of papers, manuscripts, and pamphlets.

Both a Nobel and Pulitzer Prize winner, he is one of the most famous figures to have a stand-up desk with a bookcase and a typewriter in his later years.

Stan Lee is the former head of Marvel Comics and former chairmen.

He is the mind behind ‘The Fantastic Four’, “The X-Men” and “Spiderman”.

The Pulitzer Prize winner can be seen at her stand-up desk in Jill Krementz’s new book “The Writer’s Desk”.

In 1899, Dr. Johannes Kotelmann wrote an entire chapter about the ergonomics of a school desk [4].

In that chapter, he also touches on the health benefits of upright workstations. He included a design for an early height-adjustable desk, even including a chair stand.

“It has in late years been repeatedly suggested that even with the proper kind of desk much sitting is liable to injure the abdominal organs and the circulation.Desks have accordingly been proposed which can be arranged for standing as well well as sitting.”

A standing desk shall help to focus children and adults while working, because already back then we knew the human body isn’t designed to stand all day.

“A sedentary life may be injurious. To prevent this, you should get a standing desk.”

Meanwhile, we have a lot more research on the benefits of standing desks.

In the 19th century inventors even filed patents for crank-adjustable desks already. The idea didn’t achieve widespread adoption at that time.

As we’ll learn, standing desk use was typically rare enough throughout the years that adopters of the standing work position were noteworthy.

We’ll learn more about how the standing position was adopted as an alternative to conventional sitting work and how it’s now common in the 21st century, as well as modern standing desks.

Facebook officials saw a spike in requests for standing desks after articles were published about the health risks of excessive sitting all day.

Facebook also tried out treadmill stations for employees to walk or run while working.

Google offers standing desks as part of its wellness program. Kate White, former editor-in-chief at Cosmo says she likes to write in the kitchen.

The health benefits standing desks provide are an important part of the furniture trend. Standing desks are now more affordable than previously available to many. So the times where only the rich can afford a standing desk are over.

The trend for office ergonomics will likely carry on well into the future. The benefits of a sit-stand desk are a popular topic for health research all over the world and more important than ever a great way to increase your well-being at your working space. 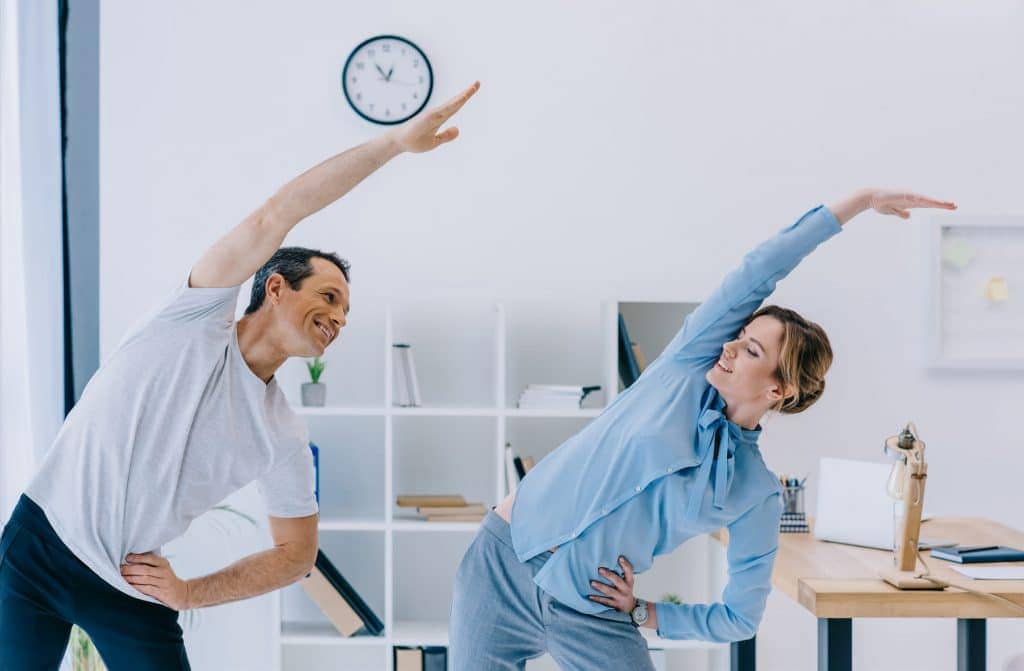